ACE #379: Do You Have a Compassionate Heart?

The other day I was having a conversation with one of my siblings about a former co-worker who has the ability to show compassion in the simplest of forms.  While walking on the side walk, she stopped to pick up a worm and placed it in the grass.  When asked why she did it, her reply was, "I didn't want anyone to step on it and kill it.  Animals don't have the ability to protect themselves."

The same day, I saw a post from one of my friends that really touched me.  She had written about how she and her daughter were driving down the street and saw a cardinal that was injured.  Her daughter asked her if they could turn around and see if the bird had a chance of being saved.  They were trying to figure out if they should let the bird rest under a tree or figure out a way to get it some help.  One of their neighbors said that she would call someone to come to see about the bird, hoping its life could be saved.

I am reminded of the many ways in which Jesus showed compassion to people.  In Matthew 9:35-38 it reads:

35 Then Jesus went about all the cities and villages, teaching in their synagogues, preaching the gospel of the kingdom, and healing every sickness and every disease among the people. 36 But when He saw the multitudes, He was moved with compassion for them, because they were weary and scattered, like sheep having no shepherd. 37 Then He said to His disciples, “The harvest truly is plentiful, but the laborers are few. 38 Therefore pray the Lord of the harvest to send out laborers into His harvest.”

I believe it is this type of compassion that could change the world...if only we could show it to each other everyday.  I challenge you today to be the laborer that God called you to be...and to do so with a heart of compassion. 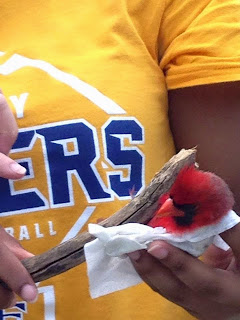 
Posted by The 'After Church' Experience at 8:46 AM